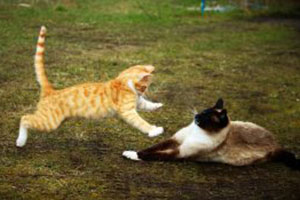 On 19 January 2016, Principal Assistant Registrar Sandy Widjaja put an end to a trade mark opposition dispute between two local pet food manufacturers over the brand names of their cat litter, deciding in favour of the Applicants, B2K Pet Products Pte Ltd, and allowing the “Kit Cat” composite mark (the “Application Mark”) to proceed to registration.

In opposing the registration of the Application Mark, the Opponents, Pets Global Pte Ltd, relied on their earlier registered “Fussie Cat” composite mark (the “Earlier Mark”) in arguing a likelihood of confusion caused by similarity of the marks and goods under section 8(2)(b) as well as a passing off claim under section 8(7)(a) of the Trade Marks Act (the “Act”).

Two notable aspects of this decision are the Registrar’s approach in determining the dominant elements in a mark-for-mark analysis under section 8(2)(b) of the Act, as well as the relatively high threshold of evidence required to establish goodwill in Singapore, an element of a passing off claim under section 8(7)(a) of the Act.

In finding that the marks were visually dissimilar, the Registrar placed emphasis on the general impression that will likely be left by the essential or dominant features of the marks on the average consumer, bearing in mind the “imperfect recollection” of the average consumer. Applying the Court’s guidance in Hai Tong Co (Pte) Ltd v Ventree Singapore Pte Ltd and another and another appeal [2013] 2 SLR 941, she had regard to the following in finding that the distinct textual components “Kit Cat” and “Fussie Cat” are the dominant and distinctive components of the Application Mark and Earlier Mark respectively:

This finding was further buttressed by the Registrar’s observation that the Opponents had themselves referred to the Earlier Mark as the “Fussie Cat mark” throughout their grounds of opposition.

As the marks were also found to be aurally and conceptually dissimilar, the ground under section 8(2)(b) failed without the need to consider the two other elements of good similarity and the likelihood of confusion.

Under this ground of opposition for passing off, the Registrar found that the Opponents failed to establish goodwill associated with its business in Singapore as well as misrepresentation amounting to confusion (i.e. passing off the Applicants’ goods as the goods of the Opponents’).

At the outset, the Registrar clarified that while sales and marketing figures are commonly used to show goodwill of a business in a jurisdiction, failure to adduce such figures is not fatal. Moreover, as the Opponents have asserted their presence in the local market since August 2006, the case was not one of “pre-trading” activities. Nonetheless, the Registrar found the evidence tendered by the Opponents to be extremely thin, thereby according little weight to statements on use of the Earlier Mark, which were not substantiated with supporting evidence.

The Registrar further affirmed the position that the lack of a brick and mortar shop in Singapore is not fatal to the goodwill inquiry, following Rovio Entertainment Ltd v Kimanis Food Industries Sdn Bhd [2015] SGHC 216 (“Rovio”). A business established on an Internet website hosted in Singapore is still a business in Singapore provided it can be shown to reach the Singapore market. Where the website is hosted outside of Singapore, sufficient nexus to Singapore has to be proven. In this regard, more concrete evidence as opposed to the mere possibility of access by individuals in Singapore to the website needs to be shown.

The Registrar found the Opponents’ own websites to be hosted outside of Singapore, with no evidence of its reach in the Singapore market. Moreover, while the Opponents’ products are listed on third party websites ending with “.com.sg” which indicates intention to target the Singapore market, sales on these websites have not been conclusively shown to be made by Singaporean customers, given the limited evidence tendered. Unfortunately, the same evidentiary gaps undermined the Opponent’s allegation of marketing and advertising efforts, which ultimately proved fatal to its goodwill claim.

In asserting there to be misrepresentation, the Opponents highlighted the low price of the products, which tend to command a lower degree of fastidiousness on the part of the consumers.

The Registrar however noted that price is only one of many factors taken into account, and came to the conclusion that there is no misrepresentation. Besides noting the dissimilarity of the marks and get-ups, the Registrar agreed with the Applicants’ submissions that the relevant public is likely to exercise a greater degree of care in selecting the cat-related products, contrary to the Opponents’ assertions. Considering the different preferences and allergies that different cats may have, the relevant public would tend to carefully assess the suitability of the product for their cats in order to ensure their health and well-being. The Registrar attributes this heightened degree of attention to the observation that pet owners commonly treat their pets akin to their own children. Therefore, despite the fact that the parties are in direct competition and the products are sold side by side, misrepresentation was not made out.

Besides providing guidance on the approach taken in assessing mark similarity, this case illustrates the difficulties that online businesses may face in establishing goodwill for a claim in passing off, and the need to provide conclusive evidence that their goods or services in fact reaches the Singapore market. More evidence, such as the number of “hits” on the website coming from internet users in Singapore as well as sales invoices issued to Singaporean customers, may be needed to build a stronger case for goodwill.

Moreover, this case serves as a good reminder that price may not always have a decisive impact on the question of confusion or misrepresentation. A product which has a low price may still command a greater degree of caution particularly where health and well-being are concerned.